New Audio Mixer:
For streaming the audio channels and audio for UStream, I used a small Behringer mixer,
namely the Eurorack UB502.
But with the limited number of channels that this mixer has, it was always a compromise.
So time for a larger mixer with more options, which is now the Behringer XENYX Q1202USB.

Output:
With the old mixer I used the line-out of the mixer and the line-in on the computer.
But with the new mixer that’s different, I use now a USB-port for audio in and out.
The mixer has 4 mono channels and 4 stereo channels, giving a total of 12 channels.
Each mono channel has an adjustable audio compressor, which is very convenient.

Development:
I have plans to split the stereo channel into two mono channels, each channel with a separate media player, so you can choose between two different audio streams. 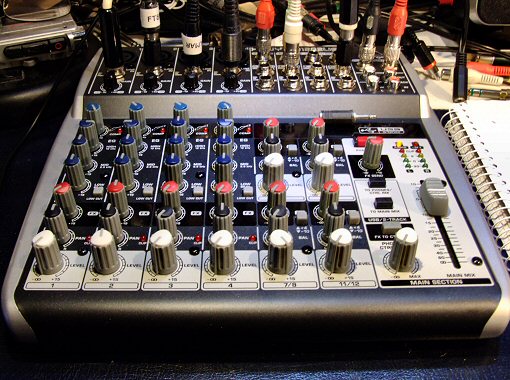